After an 11 week long summer holiday, full of cricket, birding, exams and crucially sleep, I was pretty exhausted and in a good mood I only wish I could still have right now. Once I'd got home from Norfolk, it was pretty much straight to school the next morning to collect my GCSE Results. It's hard to describe the nerves we all felt, especially as getting back into the same school was dependent on the grades we got. Thankfully, I got results that were much better than I'd expected - this also meant I'd be able to go on the annual National Trust Green Academies Project (my Young Rangers group) to Brownsea Island feeling in good spirits!
Unlike the time before, the weather was scheduled to mostly be dry and fairly warm which made the trip all the more exciting. We departed Morden Hall Park at around 11 on Tuesday 27th, setting foot on Brownsea at around 4pm after a loud and probably terrifying journey for lead ranger Richard, who was driving down. The boat trip across included 3 Shag, while from the entrance area overlooking the lagoon, there were handfuls of Curlew, Oystercatcher, Redshank and Dunlin. Our evening was mostly spent setting up camp and relaxing around our tents; although I was in charge of cooking, there was still plenty of time for me to break my scope and misplace my camera lens caps, meaning I didn't look out of the lagoon that much. Despite this minor inconvenience (at the time,) we spent an extremely enjoyable evening playing various games on a chilled, warm evening.


The first night went by with very little sleep (largely due to the other people I was sharing a tent with..!) However, being out on an island in nature is just an exciting experience in itself; perhaps the wildlife highlight of my trip was dozing and hearing a constant stream of waders passing overhead in addition to the Tawny Owls. These included Curlew, hundreds of Oystercatcher, Redshank, Whimbrel and what I was certain was an Ortolan Bunting at around 23:45. When I was back on social media a few days later, I found that one had been recorded over Corfe Castle a few minutes earlier to when I heard my possible bird, which meant it didn't match up as the 'same' bird, though it could very well have been another. Either way, one that got away...


I was up at dawn with very poor visibility looking out onto the Harbour; nonetheless, on the birding front, several Yellow Wagtail were heading southwards as were at least 3-4 Tree Pipit. I was slightly disappointed not to get onto a few more of these in the end, as I suspect I must have missed so many. Our first Red Squirrels were also seen around the campsite, although the views were frustratingly brief.


Once we'd woken ourselves up and relaxed for a few hours, with frisbee being the most popular thing to do as it was the speciality of Veronika (one of the older youth rangers,) we were then going to complete a low ropes course which was definitely not my biggest talent. In between the falling/clambering across the ropes, which was a really good laugh in itself, I managed to pick up a vocal Spotted Flycatcher right near our campsite, adding nicely to my trip list. Admittedly, it was nice to take a step back from the birds and wildlife and enjoy the company of the other rangers while taking part in the challenging activity...


We followed this up by a quick lunch and then began a Orienteering course across some of the island. Of course this was to be a race and of course I was bound to lose whichever team I was in (unless my camera and binoculars were confiscated) but we set off across the island in the early afternoon. This started well, and although we didn't get lost once we were able to get some awesome views of Sika Deer and Red Squirrels throughout the walk. Birding highlights included a few Stonechat and 2 Common Redstart, a bird that's always pleasing to see, no matter how common they are. When we eventually returned to our campsite, despite the turning weather, we decided to go for a paddle (I don't do swimming in the cold...) on the beach. From here, at high tide, I was pretty pleased to watch a group (or collective noun a 'fling') of Common Sandpipers spooked off the beach further down. It was the first time I'd seen multiple Common Sandpipers together like this, and so seeing them swerving  in amongst the waves was a pretty cool way to end the day's birding. As the weather began to turn, we returned to camp for a wash before dinner on the second night. With rain hammering down, we weren't able to stay outside for too long, so inside one of the large tents provided for such occasions we spent several hours playing a variety of games. Eventually, with everyone happy and also very tired, we retired for some sleep before our return home the next day.

Our final morning began with a stunning sunrise - we couldn't have asked for much better really! I was obviously up at 5am again for a walk nearby for some wildlife, where I got some tidy views of Oystercatcher, Curlew and Little Egret, but also of a few more Red Squirrels. A few more Yellow Wagtails flew over camp as we tidied up, and by 9am we were sadly walking back to get the ferry back to the mainland. I was still able to get a cheeky year tick from the hide though, with at least 39 Spoonbill roosting on the lagoon in the addition of numerous waders, such as Avocet, Ringed Plover and a fresh, juvenile Curlew Sandpiper. A partially leucistic Red Squirrel brought to an end another extremely enjoyable trip to Brownsea Island.
Thanks again to the 3 adults (Richard, David and Derek) who helped organise and run the trip as part of the GAP National trust, and also to all those at Brownsea for helping to run the activities. The National Trust really have given me so many epic opportunities that most 16 year olds interested in nature would never have had, and so I'm extremely grateful for all that they do! 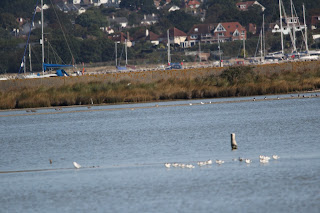 After such a good start to August, and with several weeks of my summer holidays still left to go, I was unsurprisingly in a pretty good mood. Although I'd been on holiday for two months already, the rest of my family hadn't been so lucky and so we had a few days in Norfolk for some time off together. Of course, that meant I would have a little bit of time for birdwatching, so I had to pick that time wisely...

Our first day was spent milling around our little stable cottage, where Tawny Owls were vocal at night and Swifts passed over during the day. Every Swift encounter at this point was treated with that extra moment of enjoyment, treasuring the sight of them as they darted around screaming to one another; their playful acrobatics will always be something which I love watching, and the sight of them in the summer is something I'll forever enjoy. I think they'll always be one of my favourite birds...

Thankfully for me, my sister - on her day to choose where to go - opted for a seal watching trip at Blakeney Point. This was a free ticket to not only watch the seals but also keep an eye out for some decent birds off the point. The first bird from the car was a nice female Marsh Harrier that spooked a few Redshank from the marsh, making it a decent start. Our boat trip there was quiet with a few Curlew and Little Egret, but as we got closer to the seals the tern colony was alive with creaking Sandwich Terns and bickering Common Terns. While everyone on our boat were admiring the 'cute' Seals, I was at a loss at whether I should photograph the seals or the hundreds of Sandwich Terns which were by passing by metres from our boat. With the grim, grey weather, I tried to stick with the Seals but couldn't help myself really...
As well as the Sarnie and Common Terns, which were the most numerous, I noted 2 Little Terns dashing out to sea behind us as well as a few Turnstone on the beach. However, seeing a few Arctic Tern a bit further out and mostly away from the Common Terns was also a success, as it was a bird I'd never seen much before. A 4 tern trip was a big success, and really a bonus to being able to photograph the seals from the ever-swaying boat we were in.

Our journey back was largely quiet, with the exception of a group of Black-tailed Godwit and a few Curlew that passed overhead. We then headed off to my pick of Cley Marshes Nature Reserve a little bit further east along the coast, where I had time for a couple of hours birding. Our arrival was timed impeccably with pouring rain, and so I started by having to dash to the single hide overlooking the main pools of water. The persistent rain continued to hammer down, so my plan of going to Arnold's Marsh (for Little Gull and other waders) soon went out the window. Sadly it was relatively quiet on the pools; apart from bagfuls of Black-tailed Godwit, 4 Dunlin and at least 50 Ruff, there weren't many waders. The highlight was seeing this Common Snipe appear out of the reedbeds in front of the hide during a short outburst of sun.


I then moved on to the next hides, a decision I was left to rue as my dad and sister went around to the beach. Although there were a further 40 or so Ruff, about 10 Avocet and 2 Green Sandpiper, just as I reached these hides, obviously, a Black Guillemot was seen drifting along the coastline, disappearing seconds before I had managed to run around to where it had been seen. Just as the rain began again...

While 'dipping' the Black Guillemot, plenty of creaking Sandwich Terns were still moving along the coast, fishing away, while a distant skua species (probably Great from what I saw) headed Westwards. A few Oystercatcher were also seen 'migrating' East. It was a shame to leave so early in the day but the dismal weather meant I didn't feel too disappointed.

We really weren't too lucky with weather over the next few days and apart from staying local and visiting some of the coastal towns/beaches, I took a step back from birding and enjoyed some time with my family. However, on our penultimate day on a boat trip around the Norfolk Broads we saw a Kingfisher and some close Great Crested Grebes, while almost everywhere we went we had hirundines for company. Swallows are another of the many species I miss during the winter - I can say this now as I'm writing this post in January! 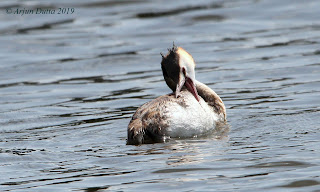 That was really it for the birding time in Norfolk, as my first visit to Lakenheath Fen RSPB on the way back home was practically bird-less. A sole Kingfisher and few Buzzard were the only birds seen in the 33C heat.
However, with a trip to Brownsea Island, one of my favourite places in the south of England, coming up a week after, birdwatching wasn't going to be taking a break any time soon...