In 2019, I was lucky enough to experience a handful of truly special wildlife moments. From rarities such as Hume's Warbler & Black-throated Thrush in the south-east, and 5 Young Birders walks in London, all the way to a fall of Willow Warblers at Spurn (over 140 in a day,) it was a pretty unbelievable year.
However, the one spectacle that left me speechless was six months ago on the first day of October, at my school in South London. After two free periods where I'd struggled to keep focus, I went outside at break time to watch a storm coming. Due to the strong westerly winds and increasingly heavy rain, a spiralling mass of hirundines began to drop from the sky. It was one of those moments where I was truly blown away; I did my very best to keep a count of how many there were, but it was more or less beyond on count. By 11:05, I'd counted approximately 770 House Martins and 2 Common Swift in the rain, metres away from my oblivious fellow students. It was a moment to savour, and despite the rain I was thrilled beyond words. There's something about birds and migration that is special; call me weird, but I find it astonishing that something that weighs around the same as a triple A battery can travel over 6000 kilometres, twice a year, to breed and survive. Migration is, in my opinion, one of the most awesome things in the natural world, and it gives me a thrill like nothing else. That day, like the Willow Warblers on the 8th August, will stick with me for a long time, and was undoubtedly one of my birding highlights of the year.

Anyhow, the point of that is to show that when times are difficult and stressful, I, like many others, turn to the environment and birdwatching as my sort of 'therapy.' At the moment, in times like this with the coronavirus outbreak, nature has become more important to everyone, and I hope others can see the undervalued importance it does bring to the human world.
In an attempt to understand migration better myself, and to find something to keep me busy and in a happier place, I recently bought kit for 'Nocmig' (Nocturnal Migration.) This consists of a microphone attached to a recorder, which means that means I'm able to record and learn more about the birds that are flying over us as we sleep.
My fairly simple setup arrived, fortunately, shortly before lockdown, and with the help of Ed Stubbs and David DarrellLambert, it was soon up in position at the back of my garden; the recorder in a plastic sleeve in my broken bird table, connected to mains electricity, whilst also connected to my microphone via a wire. This kit cost me around £110, and I have attached everything I've bought at the bottom of this post. 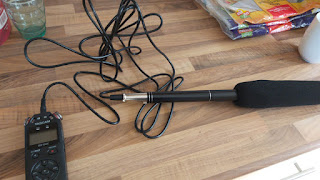 My first night of recording was the night of the 27th March, and was really a trial run to get used to it after a few days of wasting batteries/failing to get any recordings. However, I was chuffed to get faint recordings of both Canada Goose and Moorhen, but also a Water Rail, which gave a single one of its shriek-like calls as it flew over at 23:30. It was a dream start, with two new birds being recorded 'from the garden' already. I knew I was going to become hooked. My next night, like the first, stopped recording after 2 hours, with the only new bird recorded being a Redwing...

The 3rd night, however, was one to remember. Half an hour into my recording I was thrilled to get my first record of one of the sounds of winter, the whistling of Wigeon, as they flew through shortly before 21:30. At this point, I was expecting nothing else on the recording to be of much note. When I reached 22:15, I could see the spectrogram changing, and I was more or less stunned when I heard the distinct sound of Brent Geese coming from my computer. As I carried on listening it just got louder and louder, and so they must have flown almost directly over the house on their way back to the Arctic. By this point I was blown away, and eventually when I carried on listening to my recordings I was treated to my first garden Coot (4 that night,) and to my joy a Redshank. It was turning out to be a pretty crazy 3rd night; the Redshank recording was just as awesome to listen to as the Brent Geese to me. In addition to another flock of Brent Goose at 00:15, a Moorhen and 72 Redwing (yep I counted them,) the night of April Fools turned out to be pretty unbelievable...

The following day, the 2nd April, was arguably even better. Whilst I'd been recording Brent Geese and Wigeon, Common Scoter migration was underway in the North, as thousands of birds migrated across the land, towards the North Sea. Very few of us in the south were expecting much, but anyhow we had our hopes up and many young birders - especially those on a 'Vismig' group chat I'd set up at the start of isolation - found themselves standing outside on a chilly early April evening, eagerly hoping for Scoters to pass over uttering their gentle 'peep' notes the next day. Eventually, I gave in and went outside at 23:10. Within 10 minutes, I heard my first flock whistle over, even managing a phone recording of their calls. Thankfully, one of my nosy neighbours Ian a few roads away also connected with them. The next half hour was another to remember, as it saw at least a further 5 flocks fly over in the darkness. It was somewhat surreal that I was stood in my suburban, South-London garden listening to migrating sea ducks, and hopefully one that will happen again. Listening to my recordings the following morning showed that in fact 2 flocks had already passed over before I'd gone outside, as had a distant Curlew (another new from the garden) and more Wigeon. 'Nocmig' was proving to be insane!

I was now starting to feel as if I'd peaked a little early with my recordings, yet there was no time to stop. The next night saw 2 more Scoter flocks fly over, although the recordings weren't as good as the first night (only one made it on to my Xeno Canto.) It was also pleasing to add Eurasian Teal to the nocmig garden list, whilst Moorhen (1,) Redwing (41,) several ducks (unfortunately only single calls) and two gulls had also flown over. My routine is now slowly revolving around a walk or nocmig...

The madness more or less continued into the next night. My final Common Scoter flock of Spring 2020 (probably) flew over at 21:55 on the 4th April. It was a slightly more frustrating night than the past, with more background noise meaning that several recordings of ducks (several friends suggested Pintail for one of them) and a possible Little Ringed Plover had to be binned. However, two Teal flocks, 56 Redwing and also a single Blackcap song at 02:58 meant there was nothing to be disappointed about at all. Personally, I thought that the Blackcap was one of the coolest recordings that night; I've not heard it since/any locally for a good few weeks, and so some were discussing the potential of a nocturnal flight type song that they may do, which I found to be fascinating.


Unsurprisingly, and somewhat thankfully, I had 3 quiet nights after this, where a handful of Redwing, Coot and Moorhen were the highlights. I would never have thought that Moorhen and Coot would become a bird I recorded daily from my garden, which is a good mile or two from any sort of substantial water body. The night of the 8th April however was much better, and two early morning Little Grebe were recorded at 01:56 and 02:43, with their recognisable call meaning ID for once was less tricky. Also heard was a Meadow Pipit over at 23:00, as well as the ever present nocturnal Coots and Moorhen.


The past 2 or 3 nights have been less eventful with fewer bird records - however, 2 Song Thrush passed through in the very early morning (01:24 and 01:50) on the 9th, whilst a male Tawny Owl was the first recorded from my garden since the only other owl in October 2018.
As you can tell, I've found the past few weeks pretty gripping, and have been more or less revolving my life around the recordings. However, as fun as it's been, and as much as it's helped me keep my mind of other things to keep my head somewhat in place, a key question is probably what's the point in doing all this? I've seen a number of debates surrounding the growing popularity of 'nocmig', concerning 'listing' and whether it's all 'real' birdwatching etc. For me, there are a number of reasons why I think it's been such a cool thing to do:

Firstly, it's overall adding to science regarding migration and the ways birds are moving about at such a key time of year. Adding records to Trektellen (which I'm still doing,) eBird Macauley library and Xeno Canto all help create a database to learn and study the species on a national and even international scale. As a result, it's clear to me that if more people can help provide such scientific contributions, it is by all means a good thing.


Secondly, it's making us think about local bird migration routes as well. It's interesting to note that despite living several miles due south of Beddington Farmlands nature reserve, not a single one of the birds I've recorded over my house have also been recorded by Peter Alfrey at Beddington. This may suggest that they're following a different route along the chalk/higher areas of South London, or maybe even avoiding more polluted areas. It's definitely something I may end up looking more at...


Finally, it's also something different and is getting more people curious about what's going on above us as we sleep. Bird-sound is such an under-appreciated part of our natural world, so being able to study this is, to me at least, pretty awesome. Even my dad has been peering over my shoulder, and is  now currently trying to figure out if it's possible to determine how high a bird is passing over (he's an engineer!) The more that it gets involved the better, as always! In a way, who cares whether someone adds it to their garden list or not. The whole concept of listing to me can be a bit frustrating, but if people are enjoying it then surely there's no reason to complain...

Overall, the first few weeks of Nocturnal Migration recording have been pretty epic. It's above all given me something to do in a time where everyone is struggling, and though it may not solve everything or how I feel, it's without doubt a distraction that has helped me focus on what I love doing the most, which is birdwatching in one way or the other. It's been so great to have other people ask me for advice on ordering kit/setting it up, and so I've attached my set-up below, as well as a few brief instructions on using Audacity. Hopefully more people can get involved with it, and enjoy it as much as I already have :)


*Audacity - app. To export clips/audio this is a very basic tutorial: